Happy Friday the 13th everyone!!! Are you stoked? I’m stoked! For those of you who know me, or follow this blog regularly, you know that I LOVE all things supernatural, Halloweeny, and just plain eerie. So, of course, Friday the 13th is my day! I implore you all to take this day to reflect upon lucky number 13 and consider changing the stigma surrounding this glorious number.

Now, onto the blog. I had a VERY eventful week. Before we get to the question on everyone’s mind that the title put there, let’s backtrack to last Saturday. Well, actually a little further. One of Sarah’s college besties, Logan, moved to Nashville after graduation to pursue music. A couple of months ago, he came back to Omaha and hung out with Sarah, Jen, their mutual friend Jason, and I. We all had a blast. So when I heard his band, Forts Like Vana, was going on tour and would be playing shows in Fremont and Omaha, I jumped at the chance to go.

On Saturday, my mom, Adam, and I all headed to the May Brother’s Building in Fremont. This was extra nice for me, as there is a coffee shop called Milady in there that I used to frequent when I worked in Fremont (If you’re in the area and haven’t been there yet, go right now. It is the most charming, chill little place, and the food and drinks are heavenly). Before they started, Logan let everyone know it was the first time they had ever played an acoustic set and that it might be rough. I LOVED it! I had previously heard one of their songs, but it wasnt really enough to be an accurate representation of their full range. Plus, being an acoustic set, it was different anyway. I felt like it allowed me to really listen to the lyrics without some of the distractions that accompany a rock-style show. Seriously, if you haven’t heard Forts Like Vana, buy their EP on iTunes or listen to it on Spotify. Not only is Logan on the same level with Adam Levine vocally, but they are on point instrumentally and the lyrics are incredible.

Monday night, they had another show at the Reverb Lounge in Omaha. This time, Sarah was able to go with me. Although we had to sit there for two hours (because we got there at 7 and didn’t realize they didn’t go on until 9:30), we had fun just chatting, and Sarah got an opportunity to catch up with Logan and his mom. Just before 9:30, we shuffled into the small room that housed the stage. Right off the bat, it was evident that this show would be totally different from Saturday’s. The stage lights shone bright as dozens of people crowded around the stage waiting for the show to begin. Finally, they took the stage to the eruption of applause. Though I had heard the same set two days earlier, I was able to appreciate it in a whole new way hearing them in their original form. The band was at a much higher energy too. Whereas Saturday they had been sitting down the entire time, this time they were jumping all around the stage, which encouraged the crowd to get rowdy. It was pretty spectacular. Once again, buy the EP. I promise it will be worth it. Mine has been on repeat all week. You will not regret it.

On Wednesday, Sarah and I had signed up for a free Belly Dance class at Dance Out Loud Productions. Unfortunately, we COULD NOT for the life of us find this place. We even spent a good fifteen, twenty minutes driving along every one of the handful of business parks in the area looking in windows and trying to find any type of sign indicating we were in the right place. By the time we were already fifteen minutes late for the class, we decided to, instead, head to Lake Zorinsky. Sarah goes there on morning walks quite frequently, and I have been meaning to go, but never got around to it. We spent the next hour walking the three mile trail and watching the sun set over the lake. Absolutely breathtaking. And it was a much healthier idea than going home and watching Netflix.

Now, I bet you’ve  probably been wondering why I explicitly stated in the title, “No, I didn’t get engaged.” If you follow this blog or know my and Adam’s love story, you know that we both had to go through a lot to find (or re-find) each other. Because of that, we truly believe that we are destined to be together. And while we have no immediate plans to get married, or even engaged, we are very confident we will be together for the rest of our lives. So when we heard about the OMG! Oh My Gunderson’s Diamond Dash, a scavenger hunt where the winning couple would receive a $10,000 engagement ring (I know!), we thought it sounded like fun and decided to participate. Plus, we figured it’d be stupid to pass up the chance at a free $10,000 diamond ring.

The event was yesterday at Village Pointe, and it was HOT. I’m talking temperatures in the triple digits and humidity so high it felt like walking into a hot bath. Nevertheless, we were gearing to go. When we arrived, we received event T-shirts and a gift bag filled with swag from the event’s sponsors. While we all waited for the event to start, some of the employees were trying to get people hyped by dancing, but noone was taking the bait. So Adam, being the outgoing guy he is, steped forward and began doing the wild flaling he calls dancing (again, I love this guy). People loved it. The DJ even said, “I think you should get the ring just for that,” to which I whooed. Just before five, they gathered everyone around and went through some announcements and rules about the app we were using. We would have two hours to visit different hotspots around Village Pointe which would unlock riddles and tasks on the app.

We still had a few minutes, so we went to the Catering Creations booth where we entered for a raffle prize. The ladies working the booth commented on Adam’s  dancing,  saying they loved his enthusiam. Then, the second the clock struck five, we were off! We ran through parking lots and down sidewalks, perhaps a little too eager in the heat. Most of the tasks would start with a riddle. Once we figured out the answer, we would have to take a picture with that item. Other tasks included things like, “Reenact a scene from your favorite romcom,” “Take a picture of something you both love,” “Get a stranger to propose to you.” We were also asked to answer questions about the event’s sponsors.

About halfway through, the heat started to get to me. My breathing became shallow, my vision got blurry, and I was very lightheaded. I downed two bottles of water immediately, but it didn’t help. I ran into the nearest bathroom, remembering something a girl at band camp taught me when we were all getting overheated. I kicked off my shoes and let the cold tile cool my feet while I continuously ran my wrists under ice cold water. We lost about ten minutes, but I bounced back. We did start taking it a little easier after that, though.

With ten minutes to spare, we hit our last hotspots and returned to the starting point. The last task we had to complete was to take a picture of us recreating a sports moment. So, of course, we Tebowed. Right after we took that picture, one of the ladies from the Catering Creations booth, which we were standing right next to, told us that we were too cute. Might I add that several Gunderson’s employees told us the same thing after we took pictures and videos with them.

They were offering free pizza, but it was way too hot. Instead, I downed another bottle of water and a gatorade while we stood in the shade. About fifteen minutes later, they were ready to announce the winners. First, they revealed the raffle prize to be a waffle maker. For some reason, I just had a gut feeling we’d be taking that baby home. Sure enough, they called Adam’s name. People began cheering because they remembered him from earlier. Later, the same woman from Catering Creations said she was really glad we were the ones who got it. Unfortunately, that was the only prize we went home with, but we had a blast. I mean, I could’ve done without the heat, but still.

Get a picture of a unique wedding gift

Something you both love

Get someone to propose to you 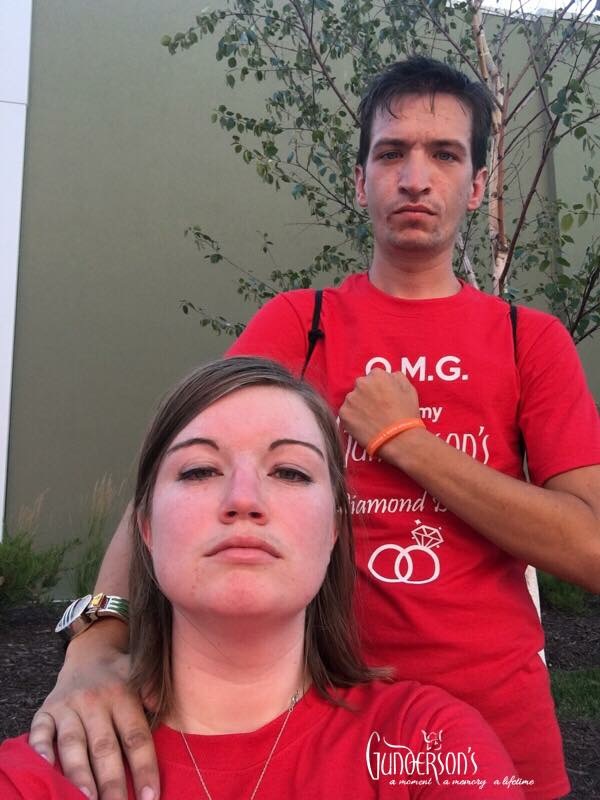 You’re favorite ring (I don’t have one) 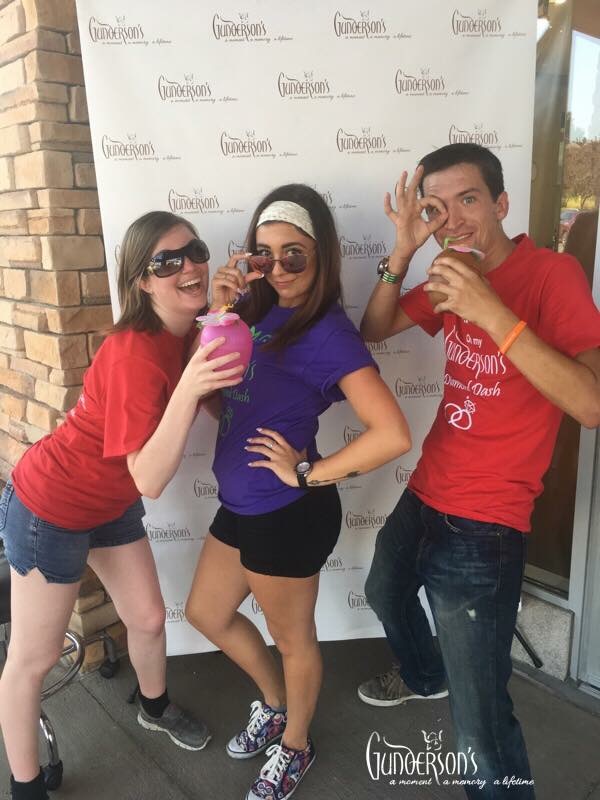 Take a picture with a Gunderson’s employee 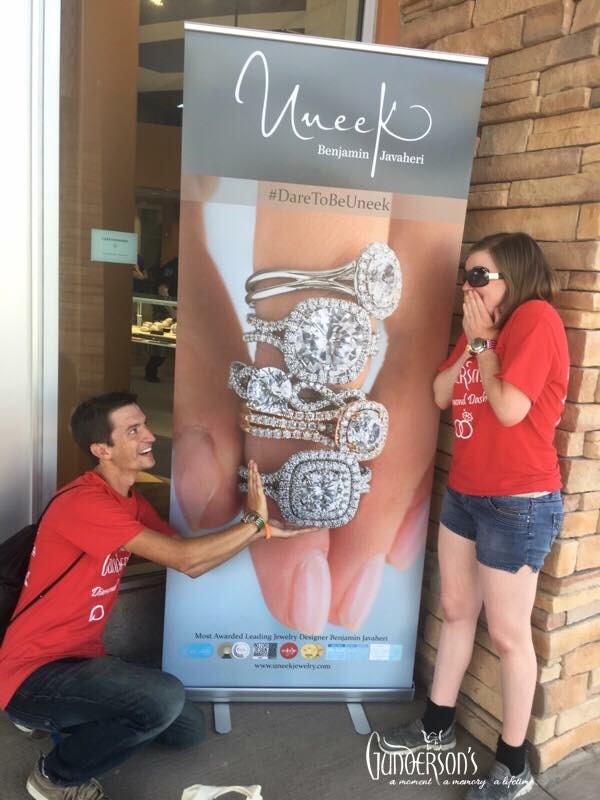 Take a picture with the Uneek banner (This picture caused several people to ask us if there was something they should know, hence the title of this post) 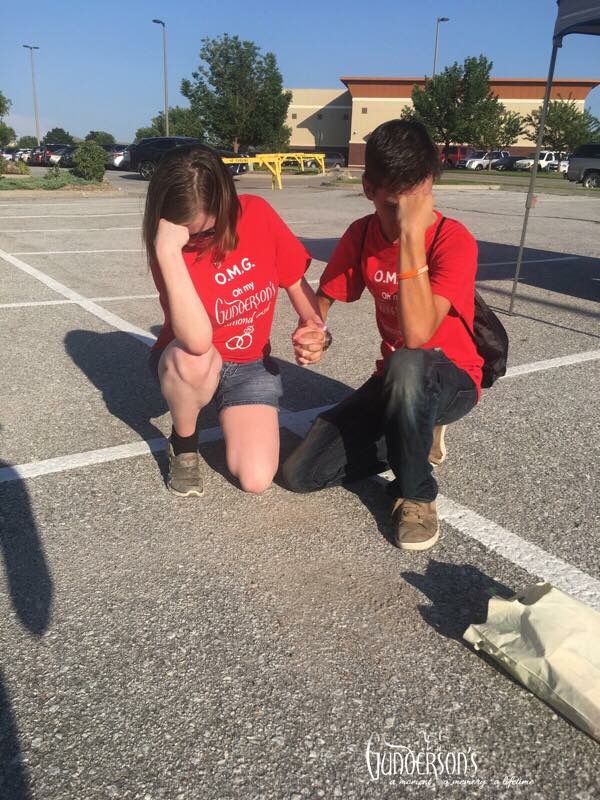 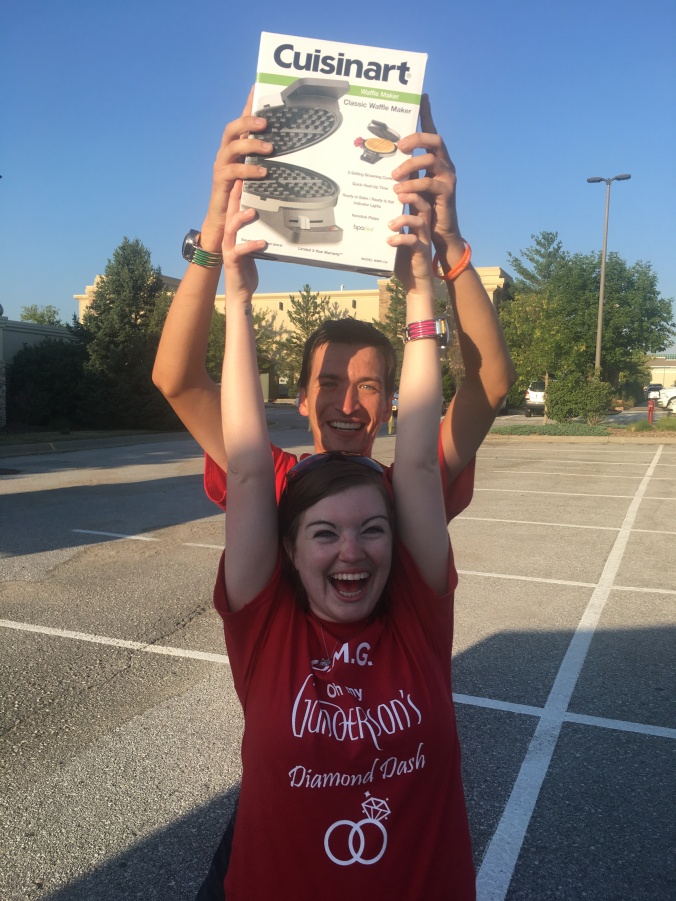 All in all, it was a very eventful week filled with great experiences and wonderful memories that I will cherish forever. Stay tuned, because this weekend is Omaha Comic Con, and you best believe we will be in attendance. It’s going to be the smallest Con we’ve been to, but it should still be pretty exciting. Make sure you add me on Instagram (@crossit_off), as I will try to live stream several times throughout tomorrow and Sunday. While you’re at it, you might as well add me on Twitter too, same handle. And make sure you check back here next week to hear all about it. Until then, have an excellent weekend everyone. And once again, happy Friday the 13th!